The United Nations General Assembly adopted a resolution declaring the 11th February as the International Day of Women and Girls in Science.

Although the proportion of women with higher education is increasing, there are still very few who devote their professional lives to research. Moreover, it is not because of a lack of talent or will but because of the difficulties that society puts in their way. For instance, at the Spanish National Research Council (CSIC) 57% of researchers in training are women; however, only 24% of women get to be head researchers.

A colleague told me once: “Science is a long- distance race and we cannot tell girls they can be whatever they want and then let this happen”.

“This”, I think, is because of several reasons:

Talking from my own experience and with total humility, thanks to the constant work, I am currently considered by the platform ResearchGate amongst the 10% of the most relevant researchers of the world, (based on own scientific publications and works from others who cite yours).

I am constantly facing all these problems and situations. When I ask for an appointment to talk to experts about a particular subject and request their opinion about the work I have in hand, they too often ask me who the head investigator is. I promise that these are situations where the doubt offends. When I get a call and they ask to talk with Dr Teijón (as you are aware of, Doctor is used for both genders in English) they ask me to put them through to him, since they assume I am his secretary because they expect to hear a male voice. Recently, at the Karolinska Institute, when I went out to give a lecture they took me for a hostess of the auditorium. 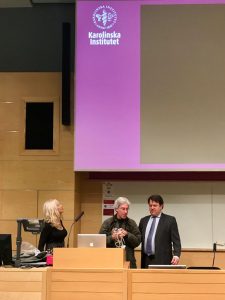 Who is the head investigator?

At a party I hosted in Amsterdam, organised by my Centre, since I was wearing a typical Spanish flamenco dress and I was at the entrance, people thought I was part of the entertainment team and they started taking pictures with me.

The participants in an experiment, men and women, were asked to describe “the perfect future machine”. Results showed that those machines proposed by men were designed so that their owners could gain control and become more powerful, whereas those designed by women had the intention to help making life easier.

What I tell those girls is: